We want to create a better everyday life for everyone

That’s what we chose to make a real impact on people's lives and the world at large.
Learn more

Creativity and innovation are our foremost priority

We combine innovation, science and sustainability to create the best living spaces for a happier and healthier life for everyone.
See my Work

If you can dream it, we can do it

The design-confused phase of your life is ending now. We are here to help you design the best living space and furniture for the best life.
See my work

Mahmoud El hajjaji is an architectural designer with many years of experience in the creation and realization of original, sensitive and high quality works of design and architecture.
With a multidisciplinary background, Mahmoud adopts the idea thatDesign consists of several elements, carried out in different ways, but the function remains always the same. Whether it is a building, an urban space, a brochure, a website or a chair, design helps to improve living conditions and solve visual and physical problems, while finding innovative solutions to the contemporary challenges of our society.
This poet of shapes and colors is a visionary architect / designer who wishes to bring back letters of nobility to the multidisciplinary design by pushing the his trade borders. His philosophy comes down to three words: elegant, simple and useful. That is the secrecy of a successful design.
His academic background was multidisciplinary, rich and polyvalent, going through various programs and courses such as computer engineering, psychology and sociology, visual art, business management, marketing, multidisciplinary design to achieve the ultimate goal and his childhood dream which is architecture. In 2014, Mahmoud obtained his Masters in Architecture from the University of Calgary, Canada. The program focused on solving environmental issues in a contemporary architectural setting. In 2011, Mahmoud graduated from the University of Quebec in Montreal, Canada with a Bachelor of Environmental Design, focusing on the conceptual and innovative aspects of architecture, interior design, industrial design and graphic design which promotes autonomy, openness and critical awareness.
During his studies, Mahmoud has worked on several interesting projects and has won several awards of excellence such as the 2010 prize in the facade restoration contest of a historic Bank Street building launched by the City of Ottawa in Canada. In particular, he was awarded the Canadian Innovation Competition prize by Microsoft for the creation of an innovative application. He has also been a finalist in several national and international design competitions.


His strong interest in the search for new technologies related to the world of design and architecture, make him an architect / designer who designs projects with a lot of openness, innovation and love, by launching out continually to new challenges.
[ Moud Portfolio ]

Some of my works

“My vision is to create a better everyday life for everyone.” 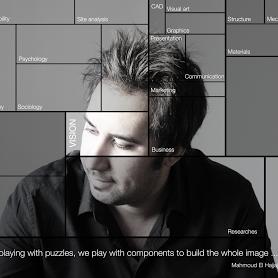